Archive for the ‘Tools’ Category

I’m getting down to my last few pounds (!) of Angora yarn. Years ago I raised Angora rabbits. (Before Handwerks was officially a business.) I was going to insert a picture here but it was before I had a digital camera, yes back in the dark ages… so you will have to imagine what they look like. I had 4 white Giant/German hybrids (Fluffernutter, Harvey, Marshmallow and Snowball), one dark grey French (Midnight) and one English (Einstein) Angora rabbit. They are great animals but require a lot of care and attention as they are prone to some breed specific health problems. The Giant/Germans are big commercial sized rabbits and I would shear them periodically and save their silky long white hair. The French and English rabbits shed seasonally so I harvested their hair by a combination of plucking and combing. Within a short period of time I had more pounds of  fur than rabbits! (and I also discovered that I had more rabbits on the way too…such as it is with rabbits) I soon found that my time was being taken up by tending the herd and I didn’t have enough time to spin up the fiber as well as take care of everything else. In 2002, I packaged up and sent off several large boxes of Angora fiber and merino fleeces to a wonderful business, http://www.fantasyfibers.com/ to have them process the fiber into yarn for me.  I’ve been using the yarns since then.

I just pulled out the last skeins from Midnight blended with natural black merino in a 1:3 ratio.

It’s a nice charcoal color and you can see the French Angora guard hairs poking out. Its soft and will full nicely when it’s washed. The yarn is 2 ply and about sport weight, 1220 yards/pound.  I’m going to use it for weft. I could have used it for warp but I thought it might fuzz too much and I didn’t want to fiddle with sticky sheds.

I warped the Gilmore, 46″ wide, 12 epi, with a commercial wool/alpaca DK weight yarn in a double two-tie threading.

and here it is close up: 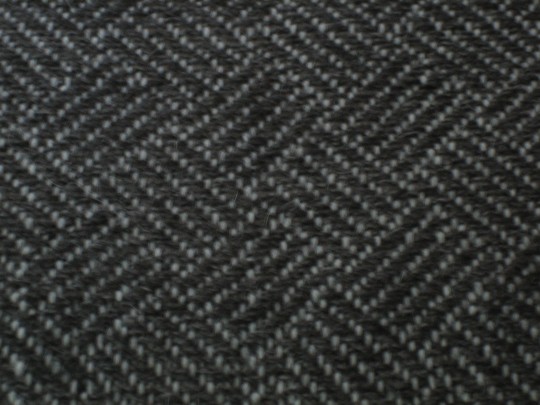 and my progress so far,  just beginning: 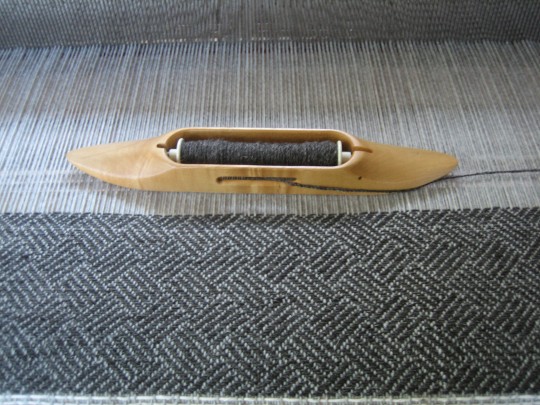 The warp is 3 1/4 yards long and I’ve left 8″ at the beginning to tie on and make into fringe at the end. I’ll just weave it off and leave enough warp for fringe at the other end.

The rabbits are long gone but it will be nice to remember and enjoy the memory of them when I have this blanket finished and want to curl up on the couch next Fall and WInter with a good book ar a fun knitting project.  I’m enjoying weaving this and it’s exciting to have the bottom of the “Angora Yarn Box” in sight!

6.  After you have knitted a series of heels and toes end with knitting a toe.  Knit a few rows of waste yarn and remove it from the sock machine.  You will have something that looks like this:

7. I turn the whole thing inside out so that I can weave in ends as well as close the foot by grafting on the wrong side. Here: 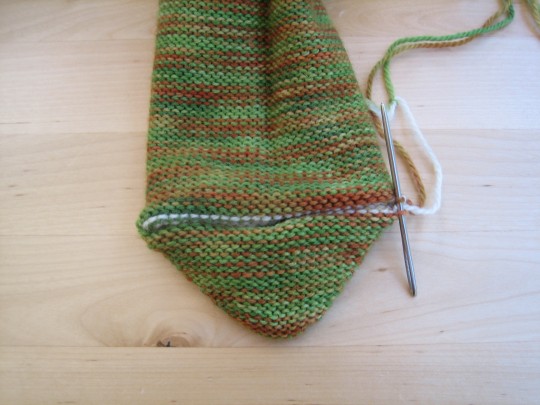 For handknitting I close the foot from the right side of the fabric with the knitting still on the needles. With most traditional sock patterns  you  close the toe at the tip of the toe. Since I’m doing short row toes I close the toe at the ball of the foot instead. You graft it the same way but you have more stitches and the grafting is under your foot when you are done. It looks like this on the needles: 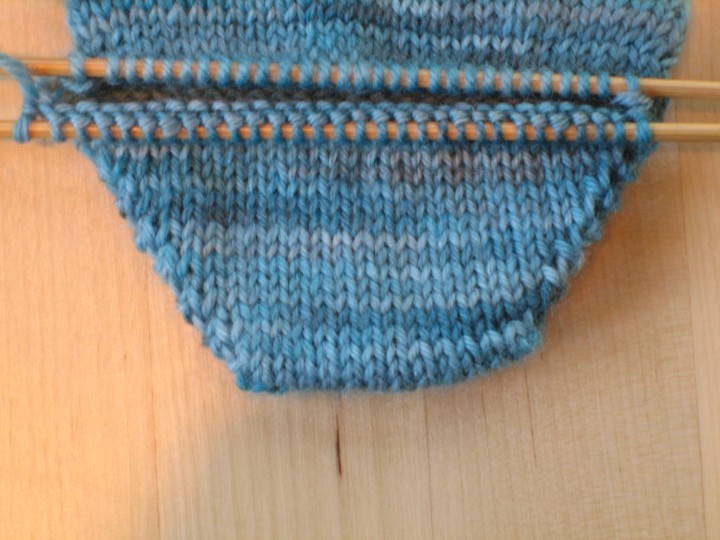 8. I usually steam block my scarves to straighten them out and make all the heels and toes lie flat.

That’s it! Its fun to dress up your sock scarves with beads on the picot hem or change colors randomly or at the heels and toes. You can make them wider by using a larger csm cylinder, and longer or shorter by changing your row count. Its fun to experiment with the way the heels and toes create curves in the scarf.  Instructions will be on my website under Patterns. Here’s a few  from my collection: 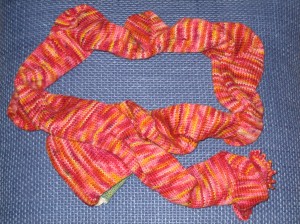 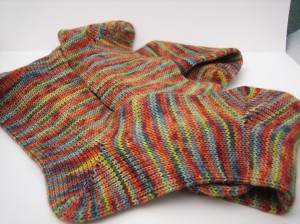 What do you get when … you get carried away with heels and toes? Whimsy, a sock scarf. I used to demonstrate antique circular sock machines at fiber and knitting events. I found that like at most public demonstrations you get many of the same questions over and over from each group of people passing by. On a sock machine most people really want to see how you knit a heel or a toe. After many hours of knitting heels and toes you end up with a wonderful Dr Suess-ish scarf. I can’t tell you how many of these I have made over the years but I can share with you how I knit them. After repeated requests for a pattern, I’ve finally written it out so you can hand knit along with me. Whimsy  If you happen to have an antique circular sock machine, here’s my method: (written csm instructions in a pdf format will be available soon too!)

2. Set up your sock machine and cast on in the usual way. I’ve got my Money Maker A right here: 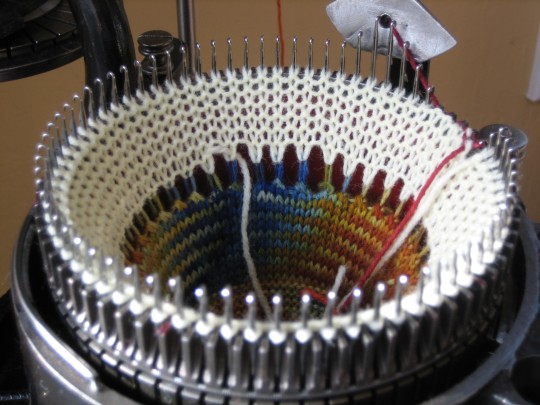 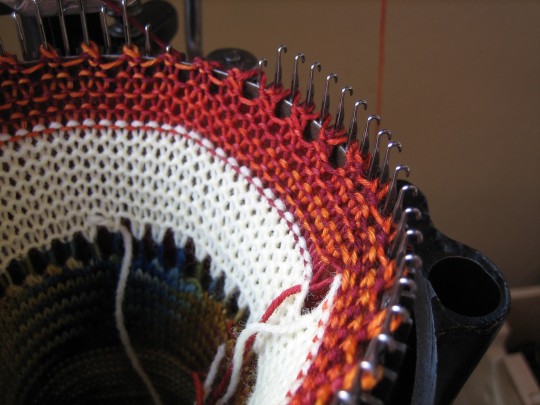 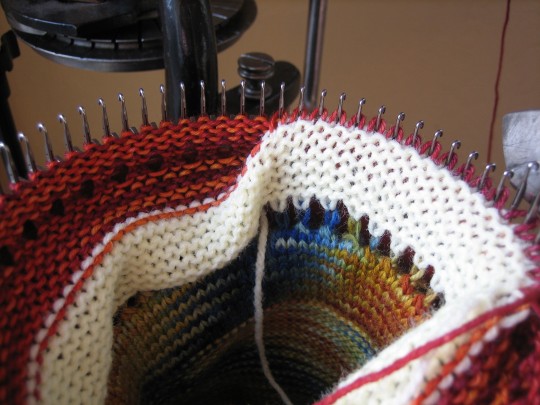 4. Start knitting again. Knit as you would for the leg of a sock.  Then you are going to turn a heel.

5. Now after your heel, knit some more rounds for the foot of the sock. Make toe but don’t csat off.

That’s the basic idea. Heels and toes, toes and heels, on and on.  Stay tuned for part 2 for details and the finished results.

It seems like it  has been raining everyday for the past week. At first I was feeling cooped up but then I started using the opportunity to do a little spring cleaning. I’m having trouble getting things finished because I keep getting sidetracked by partly started projects and equipment all over my studio space.  I’m hoping that if I get things in order and put away or sell some unused things I will be able to focus on more by having less.

Here is my plan – sell equipment that I haven’t used in over 5 years, buy more plastic storage bins for yarn and label the bins!!, group the bins by content – weaving yarns together, Handwerks shop yarns together by type, and personal knitting stash yarns  in one or two places,. Then a bin for started projects and one bin or drawer for whatever. I always need one “whatever” drawer.

I love the 5 inch dpns and they have such nice pointy points. I use them for my socks and fingerless mitts.  The bamboo is nice and smooth as well as warm. The points make it easy to knit twisted stitches, lace and small cables.

Handwerks is home to artisan yarns and textiles. I dye yarns, knit, weave and offer instruction.